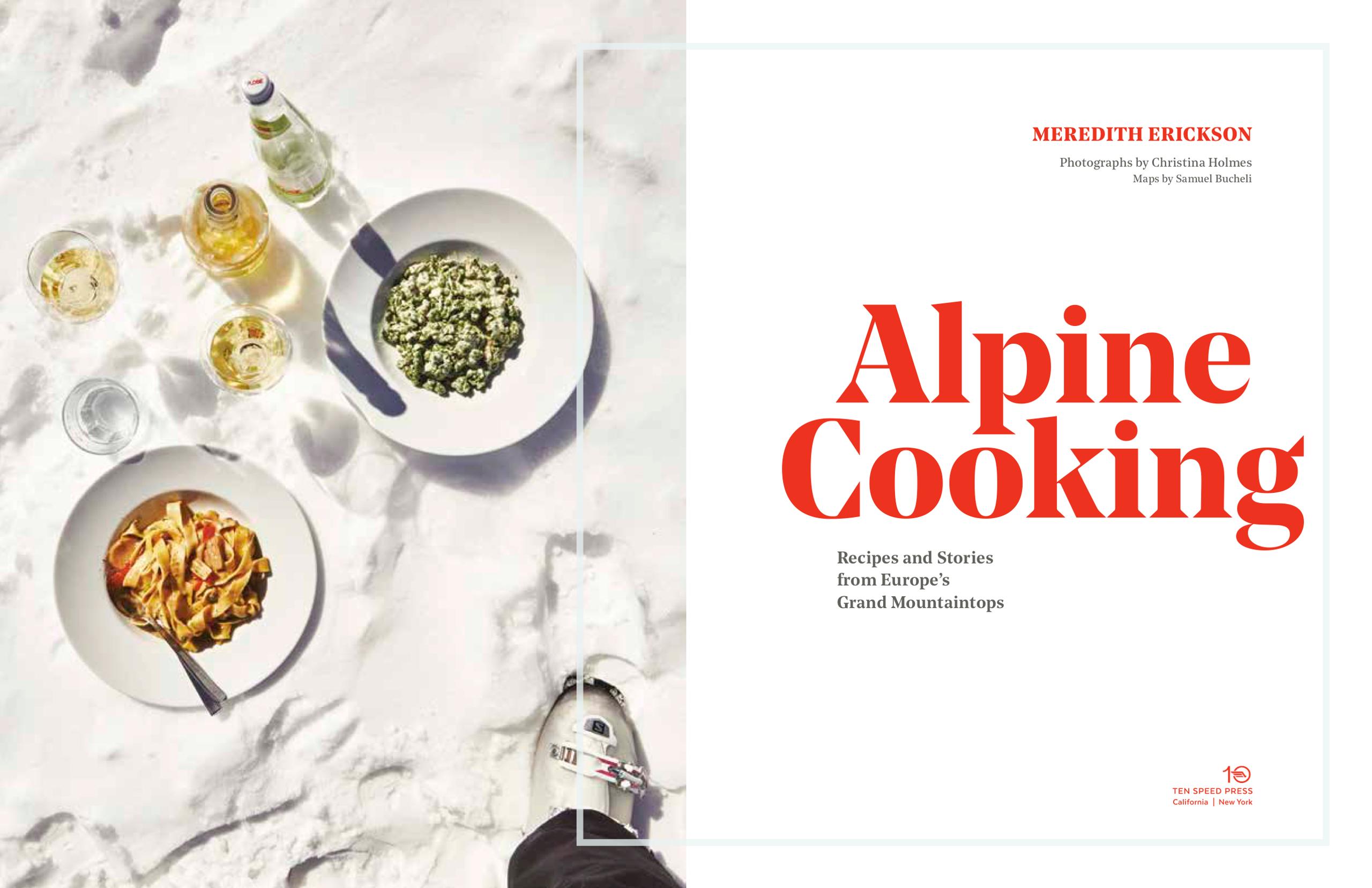 If #StayHome, #ShelterinPlace, #WFH life has you spending more time in the kitchen and craving comfort food, we have just the thing for you: , a cookbook-slash-travelogue that takes readers on a culinary adventure through the Alps. Food writer Meredith Erickson spent six years researching and traveling through the picturesque alpine region of Italy, Austria, Switzerland, and France—on wheels, skis, cable car, and by foot—collecting delicious recipes for authentic mountain cooking and memorable stories all along the way. Full of vibrant photographs of mouth-watering dishes and dramatic mountainscapes, features 80 recipes and many anecdotes from her Erickson’s epic travels. We recently caught up with Erickson to talk the Alps, cooking, and upcoming projects.

Tell us a little about your background—did you grow up skiing?

I was raised in Ontario, Canada. I didn’t learn to ski until I was 26! Now, I love both Alpine and nordic skiing.

How did you get into cooking originally?

I got into cooking via working in the restaurant business in 2001, working the front of house. I was doubling as an editor during the day and a waitress at night. These two worlds collided in 2005 when I was asked to write a book proposal when we opened the restaurant Joe Beef in Montreal. We created the concept for The Art of Living According to Joe Beef: A Cookbook of Sorts in 2008, sold it to Ten Speed Press in 2009, and published it in 2011. I loved the experience so much, and I really felt that this was what I was meant to do. From there, I co-authored Le Pigeon: Cooking at the Dirty Bird, Olympia Provisions: Cured Meats and Tales from an American Charcuterie [A Cookbook], Claridge's: The Cookbook, Joe Beef: Surviving the Apocalypse: Another Cookbook of Sorts, and my first solo project, Alpine Cooking. ↓

What originally drew you to the cuisine of the Alps?

I was traveling the Alps and couldn’t believe the level of tastiness I encountered. Consistently across Austria, Switzerland, France, and Italy, the dishes were diverse yet singular to each region. Soon, the skiing became an excuse for lunch.

Do you have a favorite region and/or type of cooking in the Alps?

The Italian Dolomites—specifically Alta Badia—are my favorite region to ski and eat. They have a universe of interconnected rifugios of which you’ll never tire. That’s followed closely by Lech, Austria. ↓

Tell us about the process of writing the book--how long were you traveling, where exactly did you go?

The process took six years. The Alps are huge, and I wanted this book to be a deep dive, so I covered as much ground as I possibly could. I covered the four Alpine countries on wheels, skis, cable cars, and on foot. I visited many restaurants, rifugios, inns, hotels, dairies, villages, and peaks for preliminary reconnaissance work, to take a lot of notes, and do many interviews. Then, over the last two years, I returned to select places with my talented photographer, Christina Holmes. She and I had the same vision of the look of the book from the jump. I like saturated and bright with a ’70s feel. She’s really talented in that she’s able to shoot landscapes, people, and food at an equally high level. ↓

Cooking often evokes memories or nostalgia in people. For you, what are the feelings or emotions Alpine Cooking brings out in you?

Alpine Cooking is really appropriate for these quarantine times as living at altitude is a practice in isolation and resourcefulness. The irony is being so high up can make you feel so grounded and at one with your environment. I think putting the blinders on and focusing on that can lead to enlightened creativity. ↓

What would you say are some of the signature recipes in the book?

Initially, I thought I would include my “hits from the Alps”—recipes from Alpine personalities and then I would adapt them. As time went on, I found it more interesting to come up with my own inspired recipes. The book is a travelogue that takes you through the Alps, and the recipes punctuate each stop on the journey—it’s edible history. It’s a mix of traditional and never-seen-before recipes. Some of my favourites include the Wine Cave Fonduta, Aosta Preserves Trolley, Vittorio’s Paccheri, Spring Rhubarb Cocktail, Kaiserschmarrn, Chartreuse Soufflé, and, of course, Ricola Ice Cream. ↓

Do you have any upcoming projects we should know about?

It’s been the experience of a lifetime. To launch the book, I created a series of one-off Alpine dinners this past winter with some of my favourite restaurants and chefs across North America, including New York City’s Frenchette, Los Angeles’ Gjusta, Portland’s Olympia Provisions, and Montréal’s Mon Lapin. I’m also going to do an American Alpine Tour this winter with me hosting dinners in places like Alta and Salt Lake City, Utah; Aspen, Colorado; Jackson, Wyoming; Taos, New Mexico; and the Berkshires, a highland region located in western Massachusetts. And I’m working with a production company to bring Alpine Cooking to the small screen, as well as working with Audible Canada on a podcast about Canadian travel—it’s called Field Guide to Canada, and I couldn’t be more proud. Look for that in the Fall. ●