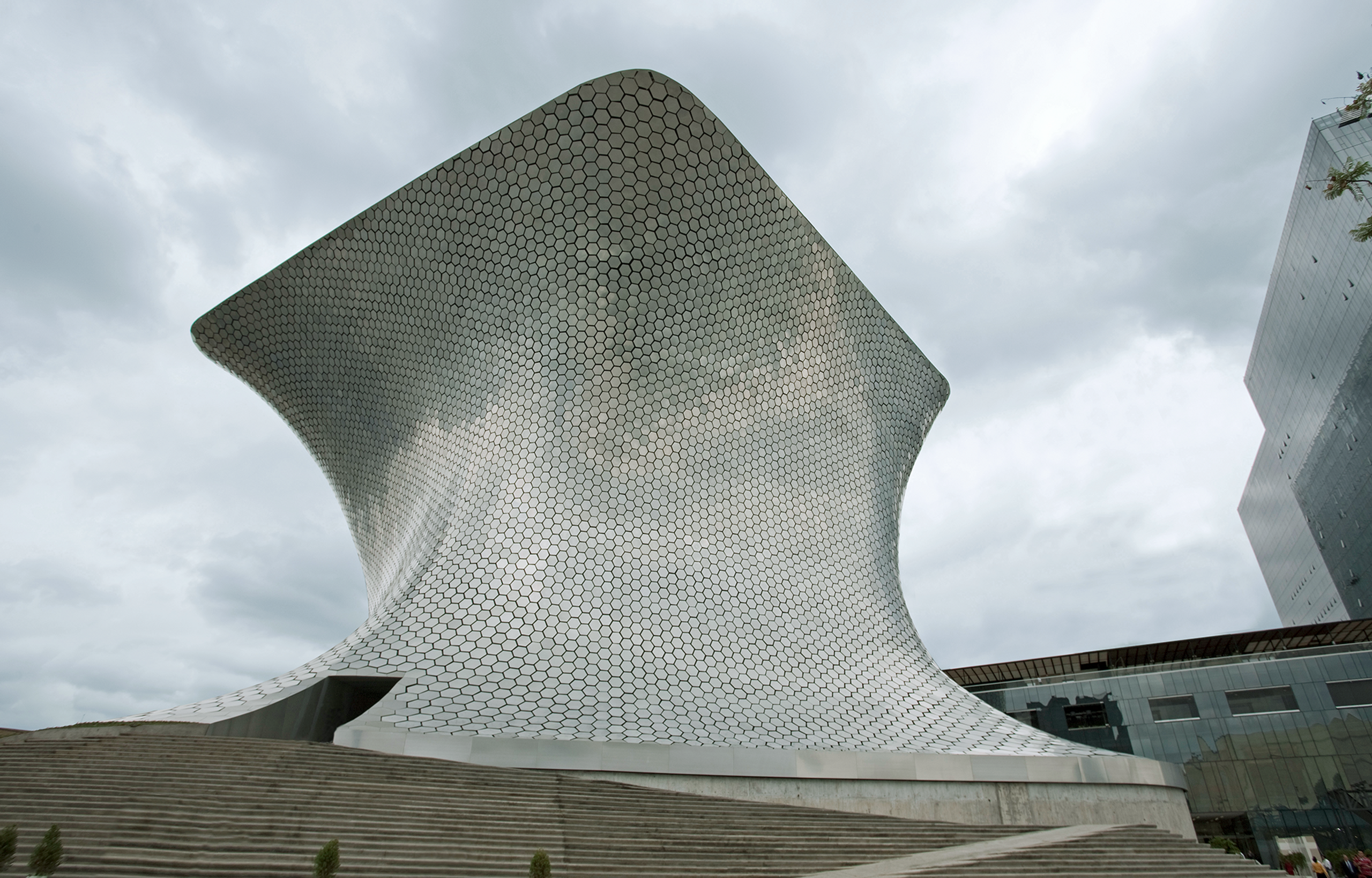 Over the last several years, Mexico City has become a cultural hub, largely due to its burgeoning art scene. A plethora of new galleries, iconic museums, independent spaces, and fairs offer a wide array of choices for the art enthusiast—from ancient relics to modern pieces and everything in between. We chose Mexico City as the site of our Spring/Summer ’18 shoot because of how dynamic of a destination it has become. With that in mind, we wanted to highlight a few of the not-to-miss museums that have helped build this city’s art scene into what it is today.

Opened in 1994, Museo Soumaya was named for the late wife of its billionaire owner Carlos Slim and is perhaps as well-known for its stunning architecture as it is its collection. The main collection is housed in Plaza Carso, designed by renowned architect Fernando Romero. At six stories, it’s a stunning structure featuring 16,000 aluminum hexagons. The museum’s interior is more minimal, with floors imported from Greece and a spiral staircase that leads visitors though a huge private collection of more than 66,000 pieces (valued at more than $700 million). Soumaya primarily features European works from the 15th-20th centuries (Auguste Rodin and Salvador Dali among them), as well as an array of Mexican works and the world’s largest collection of pre-Hispanic and Colonial coins. The light-filled top floor features a sculpture garden.

One of the most popular places to visit in Mexico City, The Frida Kahlo Museum is easily recognizable for its cobalt blue exterior. The space—both the site of the iconic Mexican artist’s birth and death—is a celebration of her life’s work. It features Kahlo’s paintings, sketches, and drawings, as well as that of her husband, Diego Rivera, and personal artifacts that belonged to the couple. All are displayed in the rooms of the home, pristinely preserved from the 1950s. Kahlo was best known for her self-portraits that depicted the pain she had endured, both physically from having polio and nearly dying in a bus accident when she was young, to the emotional pain she suffered as a result from her tumultuous relationship with her husband.

The largest museum in Mexico (and one of its most visited, if not the most visited), the Museo Nacional de Antropologica (National Museum of Anthropology) houses one of the world’s largest collections of archeological and anthropological artifacts from the country’s pre-Columbian era, dating back to approximately 100 B.C. Two of the best known relics include the Stone of the Sun (the Aztec calendar stone) and a statue of the Aztec God Xochipilli. Designed in the mid 1960s, the gigantic building features 23 exhibit rooms and covers nearly 20 acres. The experience continues outside the museum where there are several gardens that often feature outdoor exhibits.