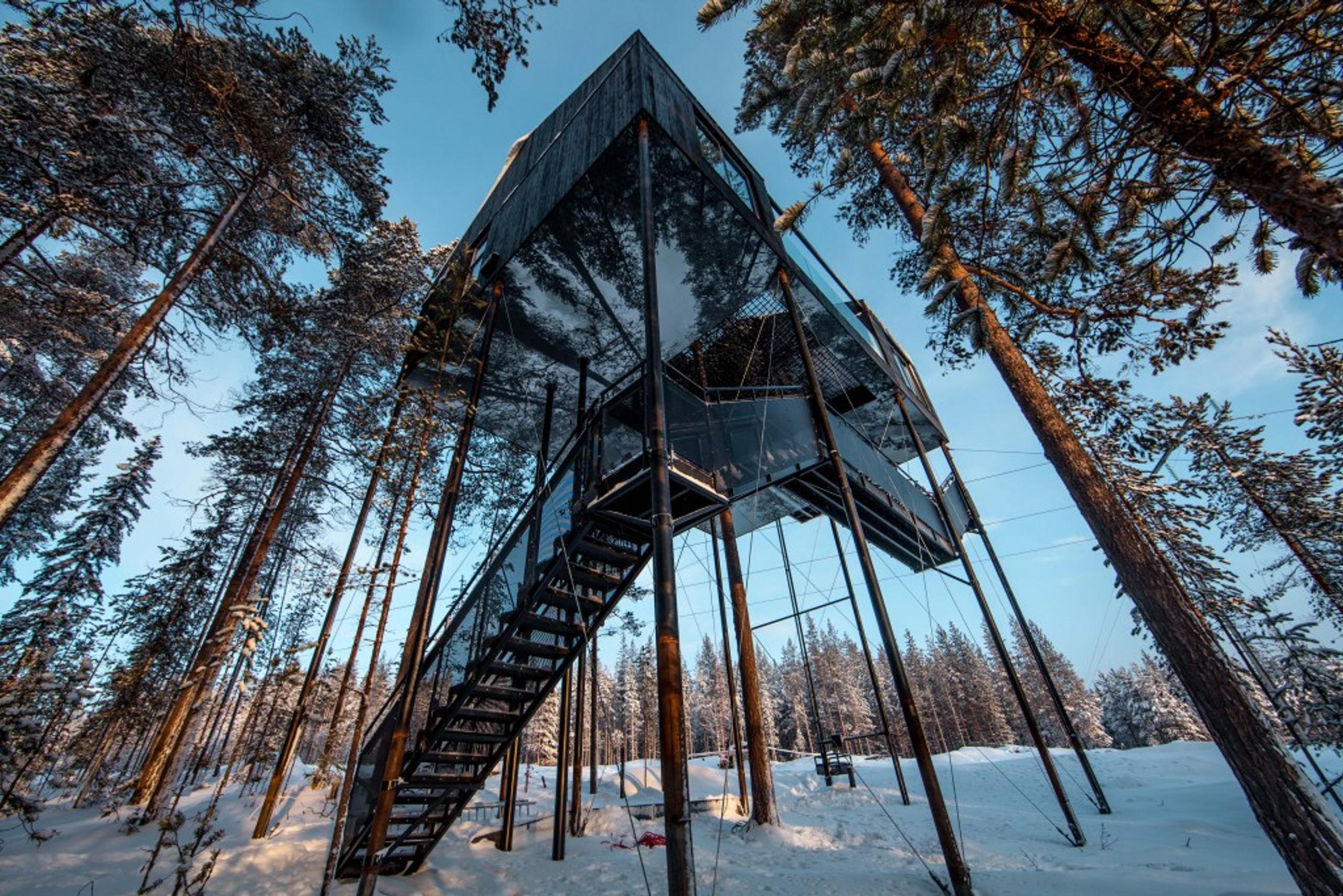 Our passion for impeccable design extends far beyond our clothes. We find a muse in everything from classic cars to art to architecture. When it comes to the latter, there is perhaps no more innovative and awe-inspiring company than the multidisciplinary architecture firm Snohetta, based in both Oslo and New York City, with multiple offices across the globe. With undertakings as far ranging as the building of a reindeer observatory in Norway to the kitchen expansion and landscape design of Napa’s world-renowned French Laundry restaurant to the concept for the 9/11 Memorial & Museum Pavilion in New York City, Snohetta explores the fusion of landscape, architecture, and the human experience throughout all of its projects. Here, we highlight a few of the firm’s most exceptional recent accomplishments.

The 7th Room, completed early in 2017, sits in a secluded pine forest in Northern Sweden as part of Treehotel—a collection of eco-friendly treehouse-style rooms each designed by a different architect. The 7th Room is the latest (and greatest) addition to the growing number of cabins at the hotel. Hovering more than 30 feet in the air, it almost camouflages itself into the surrounding landscape. The bottom of the cabin is even covered with black and white prints of treetops, further embedding the structure into its environment. But as you climb the staircase and enter a fully-functioning, ultra-modern living space, it’s clear this is not your average treehouse. While the space is equipped with two bedrooms, a lounge area, and a bathroom, Snohetta made sure the focus was on the outdoors: Floor-to-ceiling windows, minimal furnishings, and an outdoor terrace allow you to appreciate the serenity of surrounding Lapland forest and even catch the Northern Lights if you’re lucky.

Snohetta’s expansion of the San Francisco Museum of Modern Art was a colossal undertaking: Completed in 2016, the six-year project almost tripled the museum’s exhibition space, creating more public gallery spaces (both indoor and out), all while employing the museum’s original Mario Botta-designed structure from 1995. Snohetta seamlessly combined the old with the new, while also creating new ways for the museum to embed itself with the surrounding community. They expanded unticketed gallery areas and constructed new pathways to and around the building, both for museum patrons and neighborhood locals. Beyond the functionality of the expansion, the structure is simply stunning. The new eastern facade was inspired in part by the waters of the San Francisco Bay and was designed to resemble a dynamic, wave-like pattern. It is made up of more than 700 unique fiberglass panels, each of which contains silicate crystals from Monterey Bay that catch light and create the appearance of movement as the light changes.

The International Centre for Cave Art, dedicated to the famed prehistoric Lascaux cave paintings, is a uniquely immersive experience for its visitors, combining educational storytelling with an experiential reproduction of the 20,000-year-old caves. Snohetta designed the museum—which was completed in 2016 in Montignac, France—to blend into its surroundings. Set on a hillside, the museum is built to give visitors an experience that mirrors the first discoverers descending into the caves in 1940. From the lobby, visitors take an elevator to the roof, where they head down a sloped path to reach the entrance of the cave replica. In addition to meticulous recreations of the paintings, the atmosphere in the cave is true to the actual Lascaux caves: dark, damp, and humid. From the caves, visitors exit to a transitional outdoor patio space called the Cave Garden, designed as a place to readjust to the outdoors. There are stark, concrete walls with a small garden and fountain, creating a peaceful environment for reflection before leaving the museum. Snohetta designed the museum with dichotomies in mind (indoors and outdoors, ascent and descent, natural and artificial), pondering how these juxtapositions contribute to the visitor’s experience of the space.