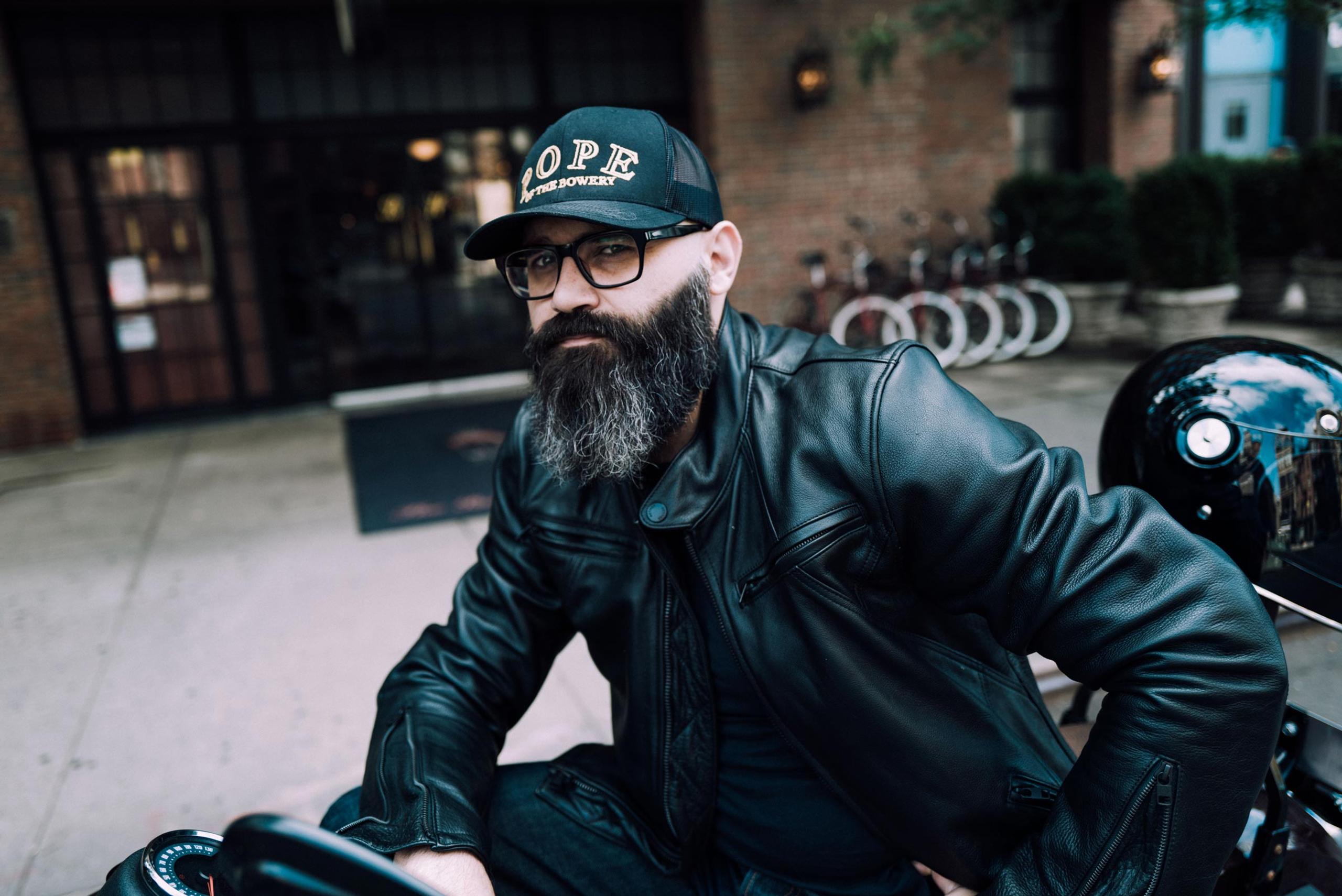 If you frequent New York City’s Bowery Hotel, you’ve likely seen Leo Jacob—aka the “Pope of the Bowery” (the moniker serves as his Instagram handle on @popeofthebowery)—holding court in the hotel’s lobby. While he’s technically the hotel’s Director of Sales & Marketing, he’s something of their mascot as well, the outgoing, big personality that makes people feel welcome at one of the city’s top properties. We caught up with the hospitality guru and steward of our favorite New York City hotel to talk to him about his multifaceted job, his love for motorcycles, and why The Big Apple is dear to his heart. ↓

Tell us what led you to The Bowery Hotel.
I actually started in food and beverage at the Gansevoort hotel as a member of the post-construction opening team, and it was there I became familiar with the hotel end of the business, and it piqued my interest. It wasn’t until someone named Liz Rais reached out to me months later and encouraged me to apply at the Dream Downtown that I started in an entry-level role as a reservations agent and worked my way up. That was 11 years ago now.

As the Director of Sales & Marketing for The Bowery Hotel, my role is multifaceted. I oversee the hotel’s corporate relationships, VIPs, marketing initiatives, brand and sales engagement, and I'm involved in revenue strategy as well—the list goes on and on. ↓

Why do you love what you do?
My role at The Bowery Hotel has me firing on all cylinders at all times. There is something about that that keeps me engaged, committed, and accomplished—both personally and professionally.

What does a typical day look like?
Every day is challenging in its own way. It’s a combination of 200-300 emails, handling a VIP’s arrival and dealing with revenue strategy, social media, and entertainment-relationship development.

Your Instagram handle is @popeofthebowery10—tell us how that started.
One of my favorite movies is Pope of Greenwich Village, and as a considerable admirer of film, I thought, Well, this seems appropriate.

What brought you to New York?
I moved here when I was 5 years old. My mother brought us here from the former USSR, and New York has been home ever since!

You are also a motorcycle enthusiast—tell us how long you’ve been riding and why you love it.
I wanted to get on a motorcycle for the longest time, but timing was always an issue. Around the time I started [at The Bowery] I said, “Enough is enough” and took the safety course and got my first bike a week later. I’ve been riding ever since. The ability to hop on the saddle and just ride off calls to me. Unlike a car, you really cannot relax while riding. The amount of focus it requires is cathartic for me. Everything turns off except my instincts, and then it’s just me, the bike, and the road. ↓

What are some of your favorite rides in and around New York?
My favorite ride is up to Deer Mountain Inn in Tannersville, NY. Although, that will change soon once I start taking longer trips!

During the pandemic you put together a book, New York Is Dead? Long Live New York!, celebrating some of New York’s characters. Tell us about the book— which is set to be released in December—and why you felt it was important to create.
The book came about as a response to the many people saying that “NYC is dead,” which really annoyed me. We New Yorkers were doing all we could to operate our businesses amidst the harsh restrictions of the shutdown—not to mention the health concerns of Covid—and hearing that statement triggered something in me. I had a Leica in my hand, and I thought, What better way to change the conversation than by showcasing the [businesses] that are actually operating? I brought this idea to Leica, and they were very supportive and supplied me with the Leica SL2 and Q2 and said, “Do your thing.”

Of the people featured in the book, who stood out to you?
The book features many of the owners of the restaurants and storefronts that operated through the pandemic or did all they could to open. Some of those are Mario Carbone, Sean MacPherson, Maja Jankelowitz, Howie Statland, Karim Raoul, and Greg Hunt. In addition, I have tribute commentary from familiar faces in the film and television worlds, many of whom were patrons of the establishments [I featured]. When I approached them to participate, no one hesitated. It’s really just a beautiful story! Some of those people include Jason Momoa, Walton Goggins, Sam Rockwell, Zoë Kravitz, and Jack Huston. Mike D of the Beastie Boys wrote the foreword, and Jason Isbell wrote the epilogue. I’m incredibly proud of what has come from a single idea. ↓

“THE AMOUNT OF FOCUS [BEING ON A MOTORCYCLE] REQUIRES IS CATHARTIC FOR ME. EVERYTHING TURNS OFF EXCEPT MY INSTINCTS, AND THEN IT’S JUST ME, THE BIKE, AND THE ROAD.”

Was there anything you learned in the process of creating the book that surprised you?
The amount of support this project received, not just by those who took away from their incredibly busy schedules to sit and discuss NYC with me but also by those who donated to the Kickstarter during a time of considerable financial constraint.

How did you find AETHER?
I linked up with AETHER while working for another property years ago, and the relationship carried over [to the Bowery]. I’m introduced to many brands and products due to my line of work, but seldom do I personally start to use the brands, which was not the case with AETHER. I seamlessly became a fan of the AETHER line!

How does AETHER work into your life?
It has become one of the brands I constantly mention when someone asks me for a recommendation, and it’s one that has never let me down. ↓

Do you have a favorite piece of AETHER?
My moto gloves! They are so broken in—I love them.

What's your favorite place you’ve worn them?
I got into an accident with them on, and they protected my hands—that qualifies as my favorite!

What is your favorite place to travel and why?
I really love visiting LA. I get into town, get a motorcycle, and just do my thing.

What is the biggest lesson you took away from the last 18 months or so?
I think like many, I’m still learning that lesson, whatever it might be. It’s been a long and difficult time, but I’ll say this: It’s never too late to challenge yourself, pivot, and get creative. •